Posted November 19th, 2013 by Tuned in to Learning

As music therapists we see the smile that appears on our students’ faces when we bring out the guitar or start singing one of their favorite songs. Music helps create a joyful connection which we can use as an in-road to target more challenging or non-preferred tasks.  While we experience these positive results, what is the scientific basis which supports this intriguing relationship between music and autism?

An intriguing area of autism music research is the distinct musical processing strengths that have been found in individuals on the autism spectrum.  Some of the key research findings relating to autism, pitch, musical memory, and melody include:

In particular, a recent study by S. Stanutz, J. Wapnick, and J. Burack found that compared to age and IQ-matched typically developing children, participants with autism demonstrated elevated pitch discrimination ability as well as superior long-term memory for melody.  The abstract for this study, as found on PubMed is as follows:

Background: Pitch perception is enhanced among persons with autism. We extended this finding to memory for pitch and melody among school-aged children.

Objective: The purpose of this study was to investigate pitch memory in musically untrained children with autism spectrum disorders, aged 7-13 years, and to compare it to that of age- and IQ-matched typically developing children.

Methods: The children were required to discriminate isolated tones in two differing contexts as well to remember melodies after a period of 1 week. The tasks were designed to employ both short- and long-term memory for music. For the pitch discrimination task, the children first had to indicate whether two isolated tones were the same or different when the second was the same or had been altered to be 25, 35, or 45 cents sharp or flat.

Second, the children discriminated the tones within the context of melody. They were asked whether two melodies were the same or different when the leading tone of the second melody was the same or had been altered to be 25, 35, or 45 cents sharp or flat. Long-term memory for melody was also investigated, as the children attempted to recall four different two-bar melodies after 1 week.

Conclusion: Superior short- and long-term pitch memory was found among children with autism spectrum disorders. The results indicate an aspect to cognitive functioning that may predict both enhanced nonverbal reasoning ability and atypical language development.

For more autism music research studies, check out our Autism and Music reference list on our Coast Music Therapy site. 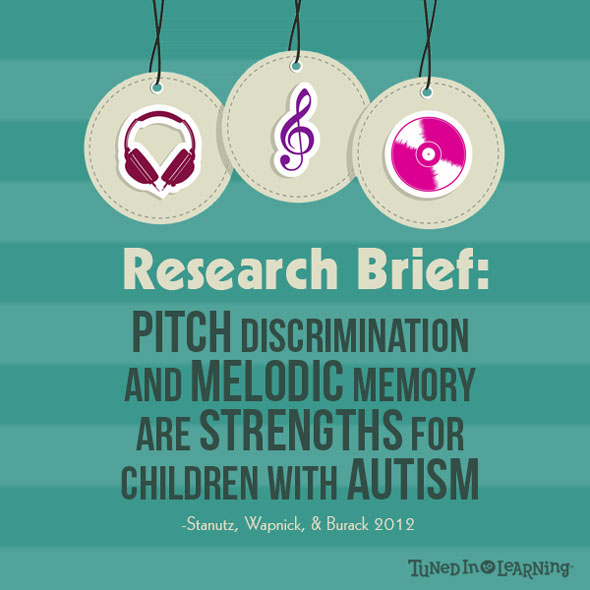